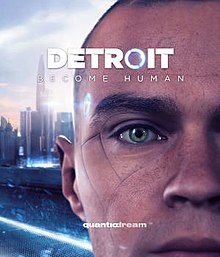 I wanted to play Detroit from the moment I saw it’s trailer during the PlayStation E3 2016 Conference. It had gorgeous faces, gorgeous set pieces. and the idea of playing through such a beautiful world had me almost vibrating. I couldn’t wait to take my first steps in this unknown world and see what it had to offer.

In the demo, Connor (one of the main characters) has to figure out how to save a little girl through his approach to a deviant android. It’s a hostage situation and it was made all the better because we were the android dealing with another android. Usually in games and media with similar themes, we’re playing as /seeing the viewpoint of a human who will eventually act as a bridge between the two species. “I’m not racist, so why are you?” kind of thing. In this game, we see inside the heads of people who are able to process things at a speed humans could only dream of. All of it makes for a great way to explain away the HUD and make the whole thing a little more immersive. When they finally finished the demo and showed all the different ways the thing could have ended I was sold.

Many people have said that they’ve found Markus (Jesse Williams) their least favorite of the stories but, I found it great. He is suitably angry about the way his people are treated, the way he’s been treated. You can make him the kind of revolutionary you want. Whether you go peaceful and kind or angry and righteous. Williams performance still echos inside me. Maybe it’s just taste but, this might be the result of a cultural effect. Things that celebrate black culture or hint about black struggle will always hit me just a little bit harder, will resonate with me just a little bit more.

Some have issues with not understanding how the androids work. This was never really hard Sci-Fi story. We don’t know really know how everything works down to the nuts and bolts but through interacting with and listening you start to get a much better picture of The Detroit world as it is.

Others just have a problem with David Cage, one of the last auteur game creators, while I haven’t spent any time with his games nothing in this game was as egregious as things that have been relayed to me from his other games. I actually found it to be one of the better expeirences that I’ve had in a narrative-based game.

There are fascinating tidbits like there’s a war brewing between the US and Russia over Thirium in the Arctic. Thirium is the “blue blood” androids use to power themselves. It is a major natural resource and the countries are in near open conflict. There’s a bit about android zoos and the problem therewithin. And questions whether an android would be better at presiding over the country. This comes from President Warren who seems to be a celebrity blogger and Social Media personality thrust into the political field with no experience and dismal approval ratings and too close to call, contentious, election cycle.

I’m already clamoring for DLC. Maybe another story in a different part of this world about an android making their way to Detriot. There so many more stories to tell and I hope Cage sees this as a triumph that people are already calling for more. I don’t know if I’ll get it but, I’ll keep home alive.

There’s a lot I could say about the tense moments and hard choices but, I feel like I’d end up taking something away if I told you too much more about this. I suggest you go into this game as blind as possible. Fail a little and see how the consequences really impact you and the characters. I definitely didn’t have a flawless play through the first time around and I’m gonna be exploring some of the options I didn’t take just to see what more this game has to offer. I can’t wait to dive in again and get that sweet platinum trophy.

A song featured in the game has not only stuck with me but, become a song I sing when I’m feeling a bit down. It obviously has some similarities with Negro spirituals of the past and because of that, it has an uplifting, somber feeling. So if you don’t mind my voice please listen.